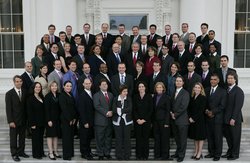 Brown University Assistant Professor of Computer Science Chad Jenkins was honored at the White House as one of the nation’s top young scientists. Jenkins was selected as one of the recipients of the Presidential Early Career Award for Scientists and Engineers (PECASE) for his research on the development of methods for autonomous robot control and perception. His work advances the idea that robot control and computational perception are better learned from human demonstration rather than by explicit computer programming.