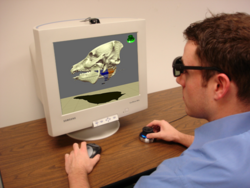 Jesse’s proposed plan of research is to design graphical models for coordinating teams of robots or coordinating human robot teams. Well structured mathematical models will unify multi-robot techniques allowing easier analysis and comparison. An additional goal of this project is to provide a structure for learning multi-robot coordination. His recent paper, “Modeling Aspects of Theory of Mind with Markov Random Fields,” was featured in the January 2009 edition of International Journal of Social Robotics.

Trevor’s research aims to develop computational and human-computer interaction techniques to facilitate analysis of medical and scientific imagery. He has proposed to design a set of quantitative models for detecting and predicting degenerative joint conditions from skeletal kinematic data captured via high-speed X-ray and CT. As an interdisciplinary effort with both clinical and research implications, Trevor’s project will include collaborators from Rhode Island Hospital and Brown’s Department of Ecology and Evolutionary Biology. His recent work, “Two-Handed Visualization: Bimanual Interaction Techniques for Exploring Time-Varying 3D Data” was presented at the IEEE Visualization conference in October 2008.

The NSF Graduate Research Fellowships provide three years of support leading to research-based master’s or doctoral degrees and are intended for individuals in the early stages of their graduate study in the fields of science, technology, engineering and mathematics. Awards are granted based on previous research experience, the proposed plan of research, and the student’s ability to make a “broader impact” in their program of study in terms of educational, industrial, and societal relevance. NSF Fellows are expected to become experts who can contribute significantly to research, teaching, and innovations in science and engineering.

Since 1952, NSF has funded 43,000 Graduate Research Fellowships out of more than 500,000 applicants. Twenty of them have gone on to become Nobel laureates.