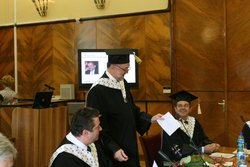 As part of the celebration of its 150th anniversary, Alexandru Ioan Cuza University in Iasi, Romania, presented an honorary professorship (Professor Honoris Causa) to alumnus Sorin Istrail. “I am very humbled and honored to receive this recognition,” he said.

Sorin’s alma mater, where he earned a B.S. in computer science in 1975, also was celebrating the centennial of its Alexandru Myller Mathematical Seminar. Sorin helped commemorate the anniversary by participating in the seminar as an invited lecturer, delivering a technical talk titled “Concepts of Mathematical Rigor for Algorithms in De-randomization, Statistical Physics, and Molecular Biology.”

The lecture’s first topic explored how to construct a random walk deterministically. What seems paradoxical can be well defined, Sorin said, if one asks for a construction that cannot be distinguished from a random walk by logarithmic space computation. Sorin presented his construction of universal traversal sequences (introduced by Steve Cook) for the de-randomization of algorithms employing one-dimensional random walks, published in the Proceedings of the 1988 ACM Symposium on Theory of Computing (STOC).

The second topic was the existence of analytical closed-form formulas for the partition function in the statistical mechanics of the Ising model, the most studied model in statistical physics. Sorin outlined his negative solution of the notorious 3D-Ising Model Problem showing that “the statistical mechanics world of the Ising model is flat!” His proof showed axiomatically the Ising model “equation”: “Non-Planarity + Translational Invariance = NP-completeness (of the partition function).” This result, published in STOC 2000, ruled out, in the computational intractability sense, the existence of exactly solvable models for every 3D model (even strongly, every non-planar model).

He concluded his lecture with results from his 2004 paper in collaboration with Eric Davidson (Caltech) on the logic functions of the genomic cis-regulatory code (published in the Proceedings of the National Academy of Sciences), and 10 years of research together (five while at Brown) on the search for the fundamental algorithm to predict the functional meaning of regulatory DNA.