The Second Human-Robot Interaction Symposium, to further define and develop the HRI Initiative at Brown, was held at ICERM on May 6, 2013. The symposium was organized by Computer Science faculty Chad Jenkins and Michael Littman along with CLPS professor Bertram Malle, and was sponsored by the Department of Computer Science, the Office of the Provost, and the Office of the Vice President for Research.

"Robotics is poised to be a game changing technology, which will change society over the next 40 years the way computing changed society in the last 40 years,” said Chad Jenkins. “Brown is in a unique position to guide robotics to improve both productivity and quality of life for people across society."

The symposium’s goal was to introduce Brown faculty to one another’s work to help deepen as well as broaden the HRI Initiative. All participants were asked to write short paragraphs about how their current or future work might contribute to the HRI Initiative and introduce themselves to facilitate conversation. An intellectual marketplace was set up during lunch, a wall of white boards on which people brainstormed about how their research and ideas might form potential clusters under the initiative’s overarching themes.

"It was amazing to me to see the breadth of research projects happening across the University and the exciting ways that they can be related to the central HRI vision," stated Michael Littman.

Through interdisciplinary and collaborative effort, the HRI Initiative seeks to define: the societal needs robots can help fulfill; the technology and scientific knowledge to be gained in order to fulfill those needs; the human jobs needed to create and maintain the robots; the social, economic, and political impacts for humans interacting and working with robots; and training and preparation needed by students for this future.

The symposium featured 18 presentations from faculty in the areas of Design and Materials, Robotic-aided Science and Exploration, Computation for Robotics, Social Cognition and Interaction, and Health and Medicine.

"The symposium truly fulfilled its mission—to bring together a wide variety of scholars from all over campus whose work is relevant to HRI,” said Bertram Malle. “The more than 70 attendees covered 21 different units and departments at Brown.  In addition to an expected strong showing from CS, CLPS, and Engineering, we had representatives from Biomedical Engineering, Planetary Geosciences, Public Health, Orthopedics, Economics, Archeology, Music, Sociology, and the Watson Institute, and many more.  At Brown, great minds talk to one another." 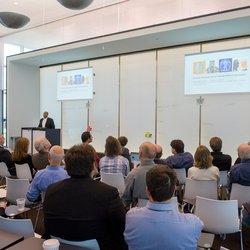