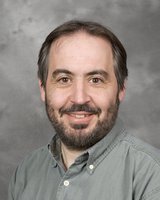 The software systems and techniques developed by Laidlaw’s group have helped collaborators in many disciplines, including bioengineers studying fluid flow in coronary arteries, archeologists studying their finds in a virtual reality model of their site, and brain researchers studying the complex 3D geometry that makes up the wiring in human brains. Additionally, Laidlaw's work in diffusion MRI is widely known and cited; he has published dozens of papers and abstracts and acquired two patents in this area.

"The Fellow award is a fitting recognition of David's achievements in scientific visualization and his internationally recognized leadership stature in that important field," stated Professor Andy van Dam.

IEEE Fellow awards are bestowed on select IEEE members with extraordinary accomplishments in any of the IEEE fields of interest. Less than 0.1% of voting members are awarded this distinction annually.

A Farewell to Professor Franco Preparata