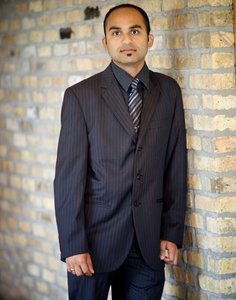 Like the company that he co-founded, Neon Labs, Sunil Mallya ’11 sees himself as rooted in science and invigorated by its potential for discovery, transforming what had previously been uninteresting or impassable. He says, “I grew up at just the right moment in time to be constantly amazed by the ubiquity of computers. I was interested in being able to express problems, model them, and leverage computation instead of just throwing more humans at our challenges. Empowering people through technology is exciting.”

After attaining a Bachelor of Engineering in Computer Science from PES Institute of Technology in 2008, Sunil went to work in the field, but something was lacking. “I wasn’t solving problems,” he explains, “and that made me unhappy, not doing what I loved. I wanted to contribute to science, and I knew Brown would be a wonderful place to do that. Sure enough, everything I’d heard about students and faculty interacting without siloes turned out to be true.”

Research for his Master’s degree led Sunil to work in systems, combining interests in energy management and machine learning. Brown also provided an introduction to fellow student Sophie Lebrecht, whose PhD work in cognitive neuroscience had produced an unusual finding: humans tend to perceive certain images negatively (for example, a gun) or positively (a baby), but no image will be perceived as entirely neutral.

The discovery raised a question: now that we understand this, how can we share it?

Inspiration came from the ubiquity of YouTube and the endless thumbnail images that form an essential part of its interface. Sunil and Sophie were struck by the realization that a more appealing thumbnail would mean more views for a video, which would mean more advertising dollars for video publishers. They began developing prototypes for a product that automatically selects images based on subconscious human visual preference, working intensely over a period of five months to acquire a first round of venture capital and the NSF’s Small Business Innovation Research grant.

Neon Labs was born. Sunil describes the organization as an enterprise company whose customers are often publishers and content creators with financial models based on advertising revenue from videos. Currently, Brown alumni comprise 30% of their staff: Sunil, Sophie, and Nicole Halmi ’10.

“What’s exciting right now,” Sunil says, “is our potential to provide services to numerous markets, from still images to e-commerce. Our existing product, Neon for Video, addresses the huge pain point in video where content creators either choose a thumbnail at random, likely with poor results, or hire an editor who could spend hours pausing the video again and again to find an appropriate image. We get publishers past that problem by using science to automatically find and surface the most engaging still images from a video -- the images that people want to click on.”

Neon Labs is currently live and providing services to customers like IGN, a large-scale gaming and entertainment site. Neon is also using their mid-2014 round of venture funding to expand the team, allowing them to serve more customers.

Sunil’s summary of the situation highlights the parallels between his own beliefs, the core values of his beloved Neon Labs, and those of his alma mater. “As we add customers,” he says, “we’re hiring accordingly. We’d love to have more Brown graduates work with us, because we find they innately understand our approach and how we build our product. They’re rooted in science, and they hold themselves to high standards. We want to emulate Brown CS, constantly growing while maintaining an academic edge. For me and for Neon Labs, that’s staying true to our roots.”