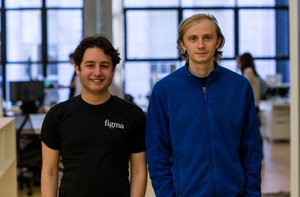 Former Brown CS student Dylan Field is the co-founder of Figma, which he launched with alum Evan Wallace '12. It's a tool that he hopes will transform the way teams collaborate in designing user interfaces. Figma automatically saves projects to the cloud with every change, allowing groups to make comments, edit design features, and review past versions, all in real-time. Recently, in TechCrunch, Dylan discusses how he came up with the idea for Figma, the many great features the tool incorporates, and his hopes for future improvements.

“Design," he says, "is undergoing a monumental shift -- going from when design was at the very end of the product cycle where people would just make things prettier to now where it runs through the entire process.” With $18M in funding, Figma will continue to be improved and expanded, hoping one day to surpass its much larger competitors.

The photo above is © 2015 Figma and used with the permission of Dylan Field and Evan Wallace.