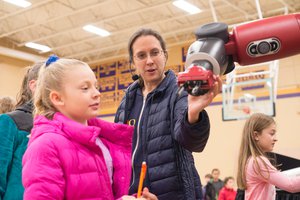 The rationale was simple. "Kids these days," Nupur explains, "start building meaning around the word 'robot' from a very early age....What can be missing from their understanding, however, is an awareness of the iterative process that goes into creating and programming these forms, as well as the humans themselves who are working at this edge of innovation." Stefanie, she says, provided "a face, a voice, and a sense of the scientific challenges we face, and are regularly overcoming" as we move from the present to a more robotic future.

Traveling just a few blocks from their home in the Humans2Robots Lab, Stefanie and Baxter (a popular robot used by H2R and other researchers) delivered a lecture to children in two different age groups. Their subject was the challenges facing roboticists and how they're being overcome, and interaction was featured throughout. "When we told the kids they could touch Baxter," Tellex says, "they lit up." Students hugged the robot, asked question after question, and used posters to "program" its actions, screaming and shouting with excitement when they were able to get it to perform popular recent dance moves.

"This was exciting for me," Stefanie says. "I have to admit that I was surprised by how many students we were able to reach and how engaged they were with the concepts as well as the fun interactions."

Nupur agrees: "Gadgets for the sake of gadgetry are fun, but robotics is important to kids at Wheeler because of its potential for human interaction and addressing some of the biggest problems our species currently faces, which is exactly what is so exciting and essential about Dr. Tellex's work."