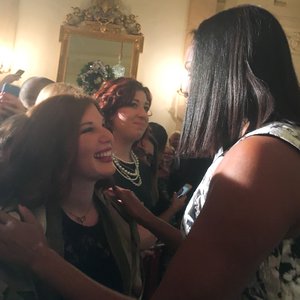 Impostor syndrome, a term coined by Clance and Imes in 1978, can be described as a lack of belief in one's accomplishments and an ongoing fear that any success to date is illusory and will be discovered as false. Increasingly, it's become a topic of discussion in the field of computer science: a post about impostor syndrome to the internal Brown CS Facebook group (note that you must have a brown.edu email address linked to your Facebook profile to view this group) has resulted in more than 130 comments by faculty, students, and alums.

It appears that women and members of historically underrepresented groups are particularly prone to the syndrome, and alum Sarah Sachs explains in a recent Washington Post article that even though she graduated from Brown, won a prize for her undergraduate thesis, and earned a much-coveted job at Google, she still doubted herself on a daily basis. That changed last year, during a chance encounter with Michelle Obama: attempting to thank the First Lady for being a role model, Sarah was stunned to find Ms. Obama thanking her for her mentorship and inspiration.

"I’ve decided to take a new approach," Sarah writes. "I’m going to accept that I can need to receive support but still be able to give support to those who follow me in our field....There are other people like me looking around to see if they are alone. We aren’t. We belong."

The full article is available here.