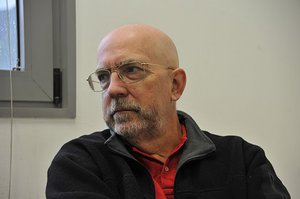 Earlier this year, the Office of the Vice President for Research announced an inaugural awards program during the academic year 2016-2017 to recognize outstanding research achievements of Brown faculty. Five awards will be given out annually along with a research stipend of $5,000. All Brown University faculty are eligible, and only one is chosen for each award. This year, two out of the five awards went to members of the Brown University Department of Computer Science.

Maurice Herlihy is the winner of the Research Innovation Award. This award recognizes a member of the faculty who demonstrates exceptional creativity in opening new research paths for their field that may prove to be of profound significance. "Maurice is no doubt one of the most accomplished computer scientists ever with several landmark contributions that are theoretically rigorous and practically influential. His work shaped and colored many facets of modern distributed and parallel computing," says professor of computer science and chair Ugur Cetintemel.

In the past two years, Maurice has also been inducted into the American Academy of Arts and Sciences, received the SIGOPS Hall of Fame Award, and was appointed to named chair. “It is an honor to have my work recognized at a world-class research institution such as Brown,” says Maurice. “I'd like to thank my students, my colleagues, the department, and the university for their unflagging support.”