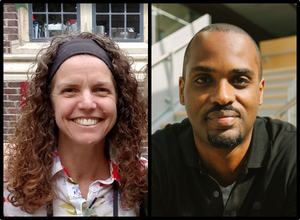 Brown University's Department of Computer Science (Brown CS) is happy to announce that pending the anticipated approval of the Corporation of Brown, Amy Greenwald will be promoted to the rank of Full Professor and Seny Kamara will be promoted to Associate Professor with tenure, effective July 1, 2018.

Amy joined Brown CS on January 1, 2000. Her research has two goals: first, the effort to design and implement AI agents that interact effectively in multiagent environments where the other agents might be humans and might sometimes exhibit surprising behavior; second, the effort to understand, explain, and accurately predict the long-term and short-term dynamics of such interactions. Recently, she gave a keynote address at Microsoft's Faculty Summit; she also leads the Brown CS chapter of Google's igniteCS initiative, in which university student volunteers teach basic computer science literacy to K-12 students in local, underserved public schools.

Seny joined Brown CS in 2016 after working for Microsoft Research. His work is in applied cryptography and is driven by real-world problems from privacy, security and surveillance. His primary focus is on the design and analysis of encrypted algorithms, which are efficient algorithms that operate on encrypted data. He maintains interests in various aspects of theory and systems, including applied and theoretical cryptography, data structures and algorithms, cloud computing, data management, economics, technology policy and networking. Recently, he co-authored an NAS report on encryption and co-created Pixek, an app that offers searchable encryption for digital photos.