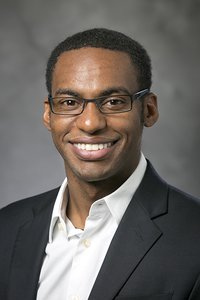 Click the link that follows for more news items about Theophilus A. Benson.

Research by Professor Theophilus "Theo" A. Benson of Brown University's Department of Computer Science (Brown CS) and his collaborators has just won one of the Internet Research Task Force (IRTF)'s six Applied Networking Research Prizes for 2018. It's also one of only two papers that will be presented at the IRTF Open Meeting during the IETF-1 conference in London next month. Out of 55 eligible nominations, the selection committee chose Theo's work on the grounds of scientific excellence and substance, timeliness, relevance, and potential impact on the Internet.

"Our work," Theo explains, "extends the community's understanding of well-accepted approaches to diagnosing video performance. In particular, while existing research focuses on diagnosing problems with information available at either the client, the server, or the ISPs packet, this extensive study demonstrated that a strong and prevalent class of performance problems can only be discovered if data from both clients and servers are collected and systematically analyzed. Building on these observations, we worked with the developers of Apache Traffic Server, a prominent web server that's being actively used by many Fortune 500 companies, including Yahoo, Comcast, Akamai, and LinkedIn, to introduce fixes and patches."