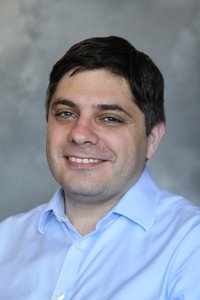 Click the links that follow for more news about George Konidaris, other Brown CS NSF CAREER Award winners, and other recent awards won by our faculty.

"Robotics is no longer primarily a hardware problem, but largely one of software," says Professor George Konidaris of Brown CS. "We already have highly physically capable robots, but our ability to program them is still quite limited. Ideally, we’d like to be able to give the robot a what goal (e.g. the light should be switched on), and have the robot figure the how part of the problem out itself. But we’re a long way from that, and a major reason why is that we don’t know how to get away from the plethora of tiny low-level details a robot has to deal with –every pixel, and every motor signal– to the kinds of high-level planning at which humans excel."

Konidaris’s recent work has been focused on the theoretical foundations of the problem of abstraction, and last year he published a paper that introduced a new theoretical framework for helping robots learn to reason abstractly. “That work felt like a great step,” says George, “but it wasn’t yet really practical, because the robot must learn every aspect of every new task from scratch.”

Earlier this month, George won a National Science Foundation (NSF) CAREER Award that will help him tackle that challenge by applying his new theoretical framework to the problem of designing robots that view the world in an object-centric way: they will learn to manipulate objects, build abstract internal representations of those objects, and reuse these representations to generalize across similar objects. His aim is to build the foundation for a new family of algorithms that will enable robots to reason and plan in complex scenarios in the real world by getting the most mileage out of the learning they’ve already done.

CAREER Awards are given in support of outstanding junior faculty teacher-scholars who excel at research, education, and integration of the two within the context of an organizational mission, and George joins multiple previous Brown CS winners of the award, including (most recently) Theophilus Benson, Stefanie Tellex, Jeff Huang, and Rodrigo Fonseca.