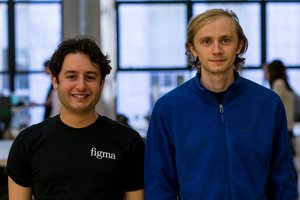 “My big vision is making design accessible to everyone,” explains co-founder/CEO of Figma, Dylan Fields, “and I want the tools to be simple and powerful.” This dream is quickly becoming a reality, as both Dylan and Brown CS alum Evan Wallace ‘12 have been recognized by INC Magazine as “Rising Stars of 2019” for founding Figma. (Dylan was also a Brown CS student.) This award aims to highlight the most impactful and world-changing startups around the world, and Figma certainly fits the bill with its innovative approach to collaborative design. The San-Francisco based startup is for those who create diagrams, illustrations, and web-based applications, and gives users the ability to work on designs together in real-time.

What sparked the idea for the company? “Well, it all started in elementary school,” laughs Dylan. “I’ve always been really excited about coding and computers, and the first time I got to do any programming in elementary school was when I had access to a basic compiler.” The creative spark certainly began early, as Dylan was designing PHP applications and even making websites for his school, and carried over to Dylan’s time at Brown. And it was at Brown that he met Evan and began exploring his entrepreneurial side.

“Evan and I had completed several internships at major tech companies,” explains Dylan, “and we were really getting frustrated with the lack of tools available for actual design.” Growing up with Google Docs, the pair had grown accustomed to the suite of cloud-based collaborative tools that allowed multiple users to work together in real-time, and were shocked that there was no such viable tool available for web-based design.

“Evan was doing work as a graphics TA,” Dylan remembers, “and it was so surprising that our current tools didn’t work in cloud-enabled ways. We wanted to make tools for designers that was more interactive.” Ultimately the pair ended up choosing to focus on interface design, because they saw the big trend of design becoming more important than ever. “Ten years ago at IBM, there were 72 engineers to one designer, five years ago it became eight engineers to one designer, on mobile it’s now three engineers to one designer,” explains Dylan, “and because of that, a lot of different companies started realizing that they needed to catch up and that design was becoming more important.”

The company launched in 2012, and immediately experienced explosive growth. The company now has over one million sign-ups, over 118 employees, and a customer base including Microsoft, Dropbox, Uber, Twitter, and Slack. Over the past seven years, the company has raised over $85 million in venture capital funding, and is valued at over $400 million today. “We’ve made it possible for everyone to work in one place, for designers to work with designers, marketing managers, and others, so that more people are able to access the design process,” explains Dylan.

With such an exhilarating journey into startup success, what advice does Dylan have for those students who want to follow in his shoes? “Internships are the single greatest time to explore,” he says, “and there’s no other time in your life where you have the opportunity to figure out exactly what kind of management style and cultures you like. Take on as many projects as you can, go through the process of making and supporting your own ideas – the more launches you have under your belt, the more you’re able to do the next one better.” This approach has certainly worked for Dylan and his team, and his company has made the dream of truly making design accessible a reality.