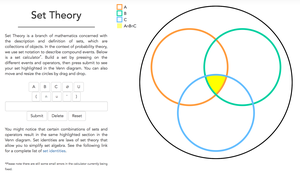 I was holding TA hours for an introductory CS course when one of my fellow TAs told me that my website, Seeing Theory, had crashed. He’d seen a post on the Brown CS Facebook group about the statistics-teaching platform that I’d been developing for nearly a year, but the link wasn’t working. My heart sank.

Did I accidentally delete something? Or maybe something changed in the permissions? What did I do? I immediately checked the student server that was hosting my site and confirmed everything was in order. It didn’t make sense. The website was up, but the server wasn’t responding.

Then I saw what was happening: there was too much traffic. Three days earlier, a professor from John Hopkins University had tweeted about Seeing Theory, and for the first time since publishing the project, I had users from states other than Rhode Island. 72 hours later, there were tens of thousands of views to the platform from all over the world.

Who knew statistics could be so popular?

Seeing Theory is an online platform for learning probability and statistics through explorable concept visualizations. The platform is split into five units, with three visualizations per unit, covering the first semester of an introductory statistics course. Visualizations range from flipping a biased coin to investigating correlation in famous datasets. Each visualization builds upon the previous one, and likewise, each unit builds upon the previous unit, much like a textbook. However, the purpose of Seeing Theory is not to replace a student’s textbook, but provide an additional resource that allows students to independently explore concepts and build intuition.

The project developed directly from two classes I took in my sophomore and junior year as a Brown undergraduate. The first was an introductory statistics course I took with Applied Math and Computer Science Professor Caroline Klivans. Despite a strong math background, I struggled to comprehend the material and had trouble developing the intuition behind many of the fundamental concepts. As a visual learner, I wished I had more resources available to me to help build this intuition.

The second class was an introduction to web development that I took with Computer Science Professor Steve Reiss. This class culminated in a final project where students worked in groups to develop a web application. When looking through the list of possible final projects, one stood out:

“The goal of this project is to develop a series of ‘applets’ that would be used in conjunction with a new, for-credit undergraduate introductory statistics course…each applet would present and reinforce a statistical concept that had been taught previously in ‘lecture.’ The concept reinforcement will come via the student’s ability to interact with the applet in both a prescribed (by the instructor) and exploratory ways.”

This was the additional resource I needed when taking my first statistics course nearly a year earlier, and now I had the tools and opportunity to build it. I signed up for the project and was placed with two other students: Madeleine Johnson (Computer Science, Brown, 2016) and Jingru Guo (Industrial Design, RISD, 2017). Together, we worked on the first version of what would eventually become Seeing Theory: A Visual Introduction to Probability and Statistics.

I took my first computer science course at Brown in the fall of my junior year.  I was an intended Biochemistry concentrator at the time, but realized that I needed at least a basic understanding of computer programming. I decided to take one introductory course and fell in love. By the time I graduated I’d taken five more computer science courses and was a teaching assistant for two more.

It was the project focus and emphasis on peer collaboration that I found extremely unique and captivating to my computer science courses, and this was especially true in the web development class that launched Seeing Theory. My collaboration with Madeleine and Jingru was invaluable in creating the initial framework and user experience for the website. Additionally, the opportunity to work with a student from RISD led to a larger emphasis on the design aspect of Seeing Theory, which has been essential to its success.

Developing Seeing Theory was only half the challenge; equally important was getting the platform integrated into courses and curricula. To do this, I first turned to professors at Brown University. I reached out to my previous statistics teacher, Professor Caroline Klivans: she agreed not only to advise me throughout the development of the project, but also pilot Seeing Theory in her statistics courses.

Professor Klivans provided invaluable advice on which concepts students struggled with based on her experience as a statistics educator. She also connected me to other professors in the Applied Math and Computer Science departments who were possibly interested in my work.  Thanks to her guidance, Seeing Theory is currently being used in two of the largest statistics courses at Brown University.

I also contacted math blogs, journals, and data scientists to inform them of the platform. Since its development, Seeing Theory has received over one and a half million page views from users in all fifty states and nearly every country in the world. I’ve met with professors from other universities, including MIT, about incorporating Seeing Theory into their curriculum, and was even approached by a publishing company to discuss the possibility of adapting Seeing Theory to a physical textbook.

Seeing Theory remains an ongoing project and I have been collecting feedback and suggestions from students, educators, and invested users. I’ve incorporated many of these suggestions and will continue to do so. Moving forward, I plan on continuing to develop the platform part-time with two other Brown graduates, Tyler Devlin and Daniel Xiang, and with RISD graduate Jingru Guo. Our team of four plans on further developing the written content and expanding the platform into machine learning concepts. We also plan on having the platform translated into multiple languages, including Spanish and Mandarin Chinese.

The unique interdisciplinary and collaborative environment of Brown University’s computer science department fostered the creation of Seeing Theory, which began as an experiment in explorable education and has since become a demonstration of the need for new approaches to statistics education.