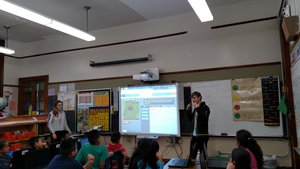 by Natalie Reed and Eric Rosen

As President Obama has said, “Computers are going to be a big part of our future…and that future is yours to shape.” Technology is one of the fastest-growing fields today, solving problems in every industry while impacting our everyday lives. Despite this, computer science is not yet adequately taught in most K-12 schools, particularly not in underserved school districts such as Providence and Central Falls in Rhode Island. Led by Professor Amy Greenwald, a group of undergraduate and graduate students who have a passion for computer science, both as an intellectual pursuit and as a path to a stable financial future, have come together to bridge the education gap by creating Brown’s Google igniteCS Initiative.

Serving elementary, middle, and high school students, Brown’s igniteCS chapter focuses on empowering students through skill acquisition, including programming tools and basic algorithmic thinking. Initiatives vary from in-school programs to after-school clubs to district-wide weekend club meetings. The purpose of these initiatives is to provide as many students as possible with knowledgeable mentors who can help them start or continue on their path to learning CS.

Brown CS’s igniteCS club ran more than 30 Hour of Code sessions at five local Providence and Central Falls schools (Spaziano Elementary School, Kennedy Elementary School, Ella Risk Elementary School, Veterans Memorial Elementary School, and Jorge Alvarez High School) during CSEd Week, December 4 to 8, 2017. This is the fifth year Brown igniteCS has participated in Hour of Code outreach. Collectively, nearly 40 Brown students (undergraduate and graduate) taught nearly 1,000 K-12 students. Their first objective was to increase student exposure to the computer science discipline, and their second, to demonstrate how computer science has the potential to help make the world a better place. With funding from Google, Brown's igniteCS club expects to continue to have a dedicated and expanded role in future Hour of Code and other outreach initiatives for many years to come.

Eric Rosen, one of the student organizers for igniteCS, looks back on the program:

“In the spring of 2017, I volunteered with a fellow mentor at Central Falls Middle School to teach 5th-7th graders about computer science in an after-school club. On our first day, we spent most of our time learning about the students’ favorite subjects, their hobbies, what they enjoyed and disliked, and what their general thoughts were about computers. Mostly we spent the day in an open discussion, which was a lot of fun to joke around with the kids and learn their personalities.

We learned pretty quickly that this particular group of students really enjoyed video games, and in particular a lot of them played Minecraft. So my partner and I spent the next week creating a Minecraft-themed curriculum that integrated core CS ideas into it. For example, when we came back the next week, we started the class by breaking down how crafting an item, like a pickaxe, in Minecraft can be thought of as a process of steps (AKA: an algorithm). We were able to actually break out a game of Minecraft and play together as a class, connecting each step of the process to a ‘step’ in our algorithm.

Not only did the students have a ton of fun getting to play with us, they also quickly grasped the idea of an algorithm and started to try applying the concept to other things in the game, such as detailing an algorithm to build a house. As quickly as we were able to write out the steps of our algorithm, students were asking and trying to make their own personal algorithms for things they like to do in Minecraft.

It was amazing to teach the students core CS thinking concepts, but I also got to have a lot of fun seeing how to apply algorithmic thinking to problems in Minecraft that I hadn’t considered but the students wanted to know. The kids had a lot of fun playing Minecraft, but they also walked away seeing how ideas from CS and Minecraft were related, which is extremely important for setting the foundation of a passion for STEM – getting to connect your hobbies with a subject is a really fun way to learn. I like to think that as much information as we teach the students, we as mentors get to learn so much from them since there’s so much freedom to personalize what our clubs teach, and how it’s taught.”

Natalie Reed, one of igniteCS’s student teachers, shares her experience:

“This past semester, I helped run Coding Girls with four fellow student mentors. The club met every Sunday for two hours. Though on the surface the club simply taught basic programming concepts like functions and conditionals, the mentors and I really aimed to inspire our students to develop a passion for computer science.  Not only were we looking to bridge the computer science education gap, but also the gender gap in computer science by targeted middle-school girls.

In order to target a diverse group of students, we partnered with many of the local middle schools and libraries directly to reach our students. We also used the theme of storytelling to try to demystify the foreign and complex field of computer science.

At the end of the club, the students were able to complete a final project to show off their storytelling and programming skills alike. Each project was amazingly unique to the student. We had projects about mystical dance battles, discovering new worlds, and the cast of Hamilton fighting for supreme control of Mars.”

This past year was a great launch of Brown’s Google igniteCS chapter and we’re looking forward to continue to make an impact in the following academic year. Many of our initiatives this past year will become annual events, like our Classical High School After School Club, Calcutt Middle School After School Club, and Coding Girls Camp. We’re also looking to expand our initiatives to reach more students and further inspire our past students. This summer, we launched our website, brownignitecs.wordpress.com, in order to maintain our connection to our students and give them a way to continue to learn after the class. We’re looking forward to continuing our initiative to inspire students to learn computer science this coming fall and can’t wait to get the season started. We’re always looking for more student mentors to organize or teach events, so if you’re interested, please apply by going to https://ignitecs.withgoogle.com/register and using V7L4QWD6 as the Brown CS group code.