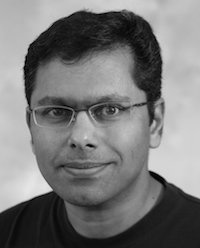 Click the link that follows for more news items about Shriram Krishnamurthi.

"Though my head is often in security, networking, formal methods, and HCI," says Professor Shriram Krishnamurthi of Brown University's Department of Computer Science (Brown CS), "my heart is in programming languages." He now gets to share his latest thoughts on the subject with a wide audience: he and six co-authors have made the cover of Communications of the ACM with an article ("A Programmable Programming Language") that evaluates the current state of the 20-year-old Racket project and looks ahead to what's next.

In the article, Shriram and his co-authors focus on the need of programmers to create and use embedded program-specific languages as part of software development. The Racket project, which began in 1995, started as an experiment to create a language for experimenting with pedagogic programming languages, but developed into a multi-lingual system with one guiding principle: Empower programmers to create new programming languages easily and to add them with a friction-free process to a code base.

Advances such as Racket's modular syntax system have been made, the authors explain, but areas such as security and dynamic checking have only been partially developed. In the end, they note, "Programming language research has stopped short of the ultimate goal, namely, to provide software developers with tools to formulate solutions in the languages of problem domains." More challenges remain to be solved, and so the Racket project goes on.

You can read the full article on the CACM website.