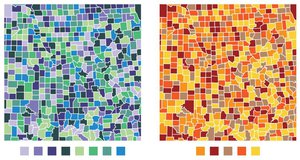 "There's been great success at democratizing the creation of complex visualization with tools like D3, Vega, ggplot, and Tableau," says PhD candidate Connor Gramazio of Brown University's Department of Computer Science (Brown CS). "But at the same time, just because we can create something doesn't necessarily mean that we should – and right now, those types of design judgements still require a lot of expertise that many visualization creators don't necessarily have. And even if people do have the design expertise, regularly figuring out usable design can take prohibitively long."

Luckily, he's offering a solution: three open-source projects that aim to reduce barriers for effective visualiztion design. Connor will be presenting them on April 25 as part of an invited talk at OpenVis Conf, a two-day, single-track conference centered around the practice of visualizing data on the web.

Connor says, "This is a huge area of research, and we've only just scraped the surface, but I've tried to make a dent in color design. The problem is that visualization design is fairly specialized in that it typically requires a contextual balance of discriminability and preference in order to be useful. This balance is particularly important for color, and although there are a huge amount of tools out there for making color palettes, the majority don't take it under consideration."

His first project has been used by about 14,000 unique users since its launch in August, and seen considerable activity on GitHub as well:

The other two projects are both D3 modules, Connor's implementations of open-sourced color science publications developed by other researchers:

"Being selected as a speaker at OpenVis Conf was an indescribably huge honor," Connor says. "The two keynotes, and many of the other speakers, were some of the people who originally inspired me to get into visualization research way back in 2010, and it's still a little crazy to think that I'm speaking alongside them at the same venue. It's a really, really fantastic way to capstone my PhD at Brown."