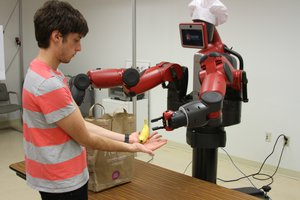 From a 16th-century automaton and a metal swan that wowed Mark Twain to present day wonders that care for the elderly and help autistic children develop empathy, a new exhibit ("Robots") at London's Science Museum is one of the most comprehensive of its kind ever assembled. The Humans to Robots Laboratory, led by Professor Stefanie Tellex of Brown University's Department of Computer Science (Brown CS), contributed a demonstration of their Baxter robot, which they've used to do pioneering work in robotic grasping, robot-to-robot communication, and human-robot interaction. The exhibit will run until September 3, and it's already received extensive coverage from the Telegraph, the Guardian, the New Scientist, and Nature.