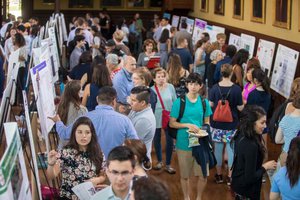 From a sea of 6,432 applicants from across the globe, two recent Brown University graduates landed honors among just 25 global winners cited for the top undergraduate research papers of 2017 as judged by the prestigious Undergraduate Awards.

Bhargava, a computer science concentrator originally from New Delhi, India, said that while the award is a personal achievement, it’s also a reflection of how Brown’s liberal arts education stands out from its peers.

“It is a testament to the value of the Open Curriculum,” Bhargava said. “Though the paper was in the international relations category, it was multidisciplinary because I relied on skills I learned through coursework in English, history, computer science and social psychology.”

Bhargava now works in Seattle, Wash., as a software engineer at Microsoft.

In the category of literature, fellow Class of 2017 graduate Noah Fields bested the competition with a paper titled “Men Reading Jane Austen: Close Writing Across Gender Scripts,” which examined cross-gender identification in the literature of Jane Austen and was a rethinking of the marriage plot using the vantage point of today’s same-sex marriage laws.

“I was taken completely by surprise when I found out my paper actually won, because I think it's a pretty risqué essay,” Fields said. “It was really affirming and humbling to get this kind of recognition.”

Fields, who is originally from Thousand Oaks, Calif., is currently a musician and poet living in Chicago.

Oludurotimi Adetunji, associate dean of the College for undergraduate research at Brown, said competition for the Undergraduate Awards is fierce and showcases the best work by college students from across the world.

“The Undergraduate Award is broadly known as the ‘junior Nobel Prize’ because the chances of being selected are less than 0.4 percent,” Adetunji said.

Adetunji was impressed by this year’s Brown candidates, whose papers were tailored from coursework and projects stemming from Brown’s Undergraduate Teaching and Research Awards program.

“The awards are an indication of the kind of academic excellence that results from Brown’s Open Curriculum and highlight the vast opportunities for students to engage in research at Brown,” Adetunji added.

The Undergraduate Awards program recognizes both undergraduate research and original student work. This year, a group of independent and international panel judges narrowed down the 6,432 submissions to name a single winner for 25 distinct categories. All winners came from a broader pool of 150 “highly commended” recipients.

Bhargava and Fields weren’t the only strong performers from Brown. The work of 17 other Brown students was also honored as “highly commended,” more than doubling the number of recipients from the University compared to last year. Two of those students, Emily Schwartz and Issac Kim, were also recognized as Regional Winners.

All 19 current and now graduated Brown students have been invited to attend the Undergraduate Awards Global Summit in Dublin this November, and the work of all winners will be published in the Undergraduate Journal.