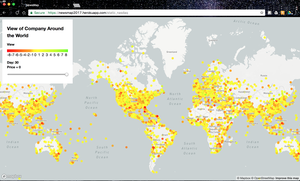 Last month, over 1000 hackers from across the globe, from Stockholm to San Francisco, gathered at HackMIT. For 24 hours, they worked in teams of no more than four to transform their ideas into reality. Some took a practical approach, making programs to sharpen an image, or websites to validate the authenticity of a news source, while others applied tech in an innovative way, making a real-life Harry-Potter-themed sorting hat, or a Roomba that could plot mathematical functions on the floor.

While everyone’s projects were certainly a key feature of the hackathon, it was the environment and the atmosphere that most clearly defined HackMIT. It was infectious: everyone was bouncing ideas off one another, helping each other when someone got stuck, and frantically writing code (or working with hardware) while sipping on a cup of coffee.

Four students, David Lu (Computer Science), Jack Roswell (Mechanical Engineering), Julian Vallyeason (Chemical Engineering), and Alex Zhuk (Mathematics), won Second Place for Best Data Visualization from Goldman Sachs. They created NewsMap, a data visualization platform aggregating sentiment from news articles published in over 65 languages. It provided an easy-to-use interface, allowing users to search companies, people, and even events, to find where they were being talked about, what the tone toward them was, and what other people and events were grouped with them. By visualizing a company’s media footprint, NewsMap provides valuable information on regions of risk, along with fields and sectors with high-growth potential, allowing companies to maximize their efficacy.

“Having the opportunity to attend and win a prize at HackMIT has been a humbling experience” says Julian, “and since Jack and I have never taken a CS class at Brown, getting thrown into the deep end and being told to create something in 24 hours really got the adrenaline flowing in me. We were very fortunate to have incredibly helpful mentors, and a really supportive community to help us every step of the way – HackMIT was definitely an unforgettable experience!”

“We were very fortunate to have a great group dynamic,” David said, “since coordination is often one of the hardest obstacles to overcome in a hackathon. We all had our strengths, and communicated to each other where we thought we could work best – for example, I worked a lot with MapBox visualization, while Alex handled most of the front-end, and Jack and Julian engineered the back-end and Carto visualization. It all just fit together really well.”

The inspiration for NewsMap came the night before, on their bus ride to MIT. “As we were talking about this year’s hurricane season, we realized that each of us saw the destruction through a different lens, based on which news articles we read,” said Jack. “I remember seeing powerful images and videos across social media, detailing the devastation caused by Hurricane Irma; Julian read about it from his news source through an economic and financial lens, while David remembered reading about how climate change was increasing the frequency of these devastating hurricanes. It was so interesting to see how these different news sources influenced the way we understand and react to these events. Thus, we decided to take it a step further, and look at global news media on a wider scale.”

“The skills that I learned from the CS courses here at Brown were also tremendously helpful,” David said. “For example, we are currently in the process of implementing the randomly weighted majority algorithm, a machine learning algorithm that we were taught in CS16, into our project to calculate influence factors of different locations on certain companies, organizations, and events.”

All four students were very happy to see their product function after 24 hours and are extremely excited to move their project forward in the coming weeks. “We definitely don’t want this to remain as just a ‘hackathon project’ and not continue our progress. We’re very excited to test new predictive learning and data analysis techniques to make sense of this all this news data, and hopefully come up with some insights about the role of the media in our lives!”