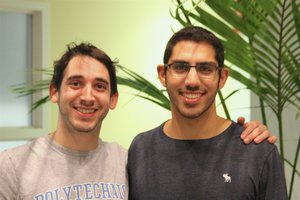 Click the link that follows for more Brown CS content about how our students continue to distinguish themselves at hackathons and competitions nationwide.

Over just the past few years, Brown CS students have traversed the country to win prizes at competitions such as HackMIT, CyberSEED, and LinkedIn's Intern Hackday. But for CyberStart, undergraduates David Armanious and Jared Siskin didn't even have to get out of their pajamas, and when the results were tallied, recognition came rolling in. CyberStart is an online contest developed by the SANS Institute that features a suite of challenges, tools, and games aimed at introducing young people to the field of cybersecurity, developing their interest and helping them pursue careers in the sector.

Only three of Rhode Island's CyberStart participants were in the top 100 nationwide scorers and received a scholarship that covers the full cost of the 2018 CyberStart Essentials cyber skills development program. Two of the three were from Brown: David placed 8th for the entire country, and Jared was 11th. Rhode Island Governor Gina Raimondo was quick to send them Certificates of Special Recognition for their achievements, praising their "remarkable commitment to cybersecurity".

Months ago, news of the contest came from an unexpected source: Jared's mother. The two friends quickly decided to take part, and they worked entirely from home, finding precious summer hours to complete almost 200 challenges on topics that ranged from steganography to buffer overflows and SQL injections. The last twenty were particularly difficult. "There were some great moments," Jared remembers, "when you'd be stuck on something for two days and suddenly realize that you had the solution."

Just a few weeks later, a course (CSCI 1650 Software Security and Exploitation) taught by Professor Vasileios Kemerlis offered a chance to learn skills that will likely prove useful at future cybersecurity challenges. "When Professor Kemerlis started talking about buffer overflow vulnerabilities in his first class," says David, "we just looked at each other, because we'd seen the same kind of problems in CyberStart and we knew how important the concept was."

It's too early to forecast careers in cybersecurity for David and Jared, but they're considering some higher-level coursework on the subject. "We had a great time," Jared says. "We just really enjoyed getting into the material." CyberStart is likely to return next year, and in the meantime, another cybersecurity platform challenge is on the calendar for March, offering new challenges for students. The two friends are already making plans to take part.