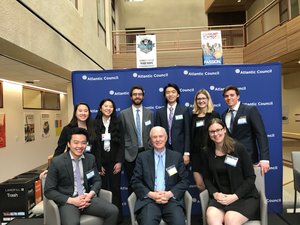 The event featured 38 teams from 24 institutions across the country and was designed to give students a taste of the challenges that face White House policy makers when responding to national cybersecurity threats. Winners of first place in 2015 and a prize for Best Teamwork in 2014, Brown faced even greater competition this year and advanced to the second of three rounds. This is John's fifth year of participating in the competition, and it was the first where he fielded two teams.

The competition began weeks in advance, when the students prepared a decision document, operating as if they were members of the National Security Council staff. They were asked to respond to a cybersecurity threat by crafting responses at two different levels, for both the National Security Advisor and the Homeland Security Advisor. Each team had ten minutes to present their ideas orally, took questions for ten minutes, recessed, and then returned for feedback. Judges included a wide selection of individuals from both the public and private sector: the US Departments of Commerce, Defense, Homeland Security, State, and Justice; the British Embassy; Deloitte Consulting; the Atlantic Council; the US Air Force; IBM; Google; Facebook; the New York Times; and dozens of others.

During lunch on Friday, students attended presentations and career panels led by experts from the Cyber Statecraft Inititative, the Scowcroft Center for Strategy and Security, MITRE Corporation, the US Department of Homeland Security, and other organizations. That evening, the teams were hosted by the Baker & McKenzie global law firm at their offices on Connecticut Avenue, overlooking Lafayette Park and the White House. Speakers included Damon Wilson of the Atlantic Council, Rob Joyce (former Special Assistant to the President and Cybersecurity Coordinator), and Dmitri Alperovitch, CTO and Founder of Crowdstrike. After the speeches, the teams qualifying for the next round were announced, and BUS 1 and BUS 2 both advanced.

Overnight, faced with a second Intelligence Report, the teams scrambled to prepare another decision document to fulfill the new task of presenting next step policy and strategy options to the National Security Council. The next morning brought a second round of presenting to a panel of judges and then answering their questions. This time, Brown's teams weren't among the qualifiers for the final round, but they had already defeated numerous competitors and produced innovative solutions under highly challenging conditions: judges commented on the "outstanding" performance of both teams and praised their "well-organized presentations".

"Both teams did an amazing job," says John. "There were more than three dozen opposing teams, and many of them contained individuals who are established professionals in the field, some almost twice the age of our team members. Our teams performed extremely well, and they understood the issues like true experts. At one point, one of our students even supplied a piece of information about a cryptographic fine point that the judges were unaware of! Both teams prepared thoroughly and presented extremely well, and I'm really pleased with their hard work."


The Brown CS contingent with Rob Joyce, former Special Assistant to the President and Cybersecurity Coordinator