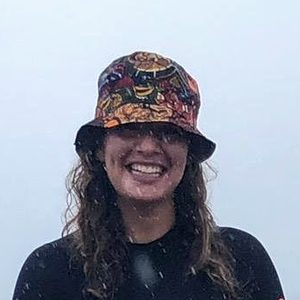 Click the link that follows for more stories about Brown CS alums and their diverse career paths.

"One huge highlight of my work is the effect and impact my projects have had on others,” says Brown CS alum Jemma Issroff, whose career path has allowed her to work on a wide variety of projects as podcast host, author, and backend software developer. She’s an excellent example of someone who’s able to work on highly technical challenges while still having an effect on the communities that matter to her. After several different experiences as a programmer, Jemma has found a home at Shopify, doing work that she feels has a true impact on users.

Although Jemma’s career focuses on programming, she’s also integrated her Education degree from Brown to propel her other projects. During her time at Brown, Jemma enjoyed combining both of her interests, taking on teaching assistant roles in computer science classes where she thrived at the intersection of CS and education. As for the types of classes she took at Brown CS, Jemma focused more on the theoretical classes involving algorithms and programming languages.

The theoretical work Jemma engaged with in college corresponds to her professional experiences. Working as a backend software engineer has provided her with the opportunity to apply the knowledge and critical thinking skills she acquired at Brown to real world problems. Her current role at Shopify involves working directly on Ruby itself. During her time at Brown, Jemma worked at both Google and Knewton as an intern. These experiences, she says, “offered me the chance to learn how to navigate being a part of work that was important to me.” Following these internships, Jemma went into technology education at Panorama Education, again working at the intersection of her two concentrations at Brown.

During and between work experiences, Jemma has authored a book, Ruby Garbage Collection in Under Two Hours, founded a Ruby women and non-binary community that now has several projects going with over 300 members, and co-hosted a podcast called “The Ruby on Rails Podcast.” Jemma was inspired to start all of these projects after meeting people like herself last fall at a Recurse Center retreat for computer programmers. Jemma starts her projects “largely for reasons around diversity, equity, and inclusion.” These projects give her the chance to “empower people to themselves to become speakers and get jobs in the programming world.”

The idea for Jemma’s book came to her because she “wanted to be able to write something while also learning about Ruby memory management.” She knew that she had to get into the Ruby community in order to be able to write this book, so she joined Twitter for the first time. As she continued to attend Ruby meetups, she realized the lack of women and non-binary representation. This inspired her to start a meetup where women and non-binary folk can speak together. Since the initial meetup, this same group of now over 300 people have formed a Slack community, book club, job interview group, and more communities. The rest of Jemma’s experiences “snowballed from these first few undertakings.” And Jemma is not done creating. In Novemeber, she just recently gave a talk, moderated a panel, and hosted two women/non-binary events at RubyConf in Denver.

Her passion for combining education and programming truly originated at Brown. During her time here, Jemma learned how to teach effectively while still educating herself in the process. Since before college, she’s understood the importance of a support network. She is “grateful for all the people who went out of their way to support me” and she hopes to continue to give back just the same. The rewarding part of her work has been experiencing the feedback from people who come up to thank her for offering support and resources: “The little comments to me feel the most rewarding where people actually feel an impact of the writing I do, including my book and the help people found through my other research.”

Brown CS regularly publishes news articles about our pioneering and innovative alums. We have no financial involvement in any of the companies mentioned above and have not been compensated in any way for this story.