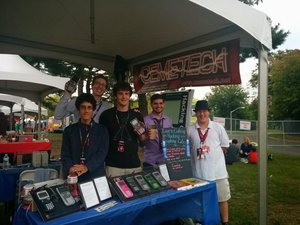 It says something about computer science that thousands of practitioners worldwide have come to see graphing calculators, that mainstay of high school math class, as an intriguing programming environment. And it says something about Brown CS PhD student Thomas Dickerson that his love of working within constraints led him to programming graphing calculators, and graphing calculators led him to see the value of unique and early CS education for underprivileged kids. As part of Cemetech, a hub for technology professionals and enthusiasts who develop hardware and software, Thomas recently won two awards at World Maker Faire in New York City, the fourth and fifth wins for the group in three years.

“As a kid,” he begins, “I was really into LEGO, and I was a Boy Scout as well. They’d take us pioneering, give us rope and a handsaw, and we’d spend the night in a tree-fort that we’d lashed together ourselves. On the LEGO side of things, I was reading four or five hours per day at that point in my life, and I was obsessed with the idea of replicating something from my own imagination, or from books, in real life.”

Dickerson’s hands start to move slowly as he explains: “When I found out about black duct tape as a little kid, it was just amazing, because then I could make realistic handles for my hand-made lightsabers. There was an element of problem-solving, and creativity, because kids don’t have any real budget to work with. I found a bottle cap that was the perfect shade of red, carved it out to make the lightsaber button…”

When Thomas was in fifth grade, one of his friends had a graphing calculator that had been modified to run a Space Invaders-style game, and that was his introduction to what he calls the “grand tradition” of creating software for them. This spurred an interest in programming (at first, Java) and the purchase of a calculator of his own at the start of high school. This led him to Cemetech: nine years later, he’s still heavily involved with the organization, where he serves as an Administrator.

Now in its fourteenth year, Cemetech has pursued an astounding variety of hardware and software projects across highly diverse hardware platforms. Their exploration of graphing calculators alone has seen the creation of videogame emulators, soldered-on input devices, the addition of Internet and GPS capability, and even the composition of music.

“It fascinates me to work within constraints,” Thomas says. “Programming in assembly language is a lost art, and it lets you look at computation without any layers of abstraction. It’s actually extremely relevant: at this point in computing history, no single person can understand a microprocessor in all its complexity, but it’s an important skill to be able to start with the most basic level of understanding and work your way upward.”

Even more than that, it’s fun, which is why he’s come to see it as a “really cool platform” for promoting unique, early, and inexpensive computer science education. Maker Faire judges agreed, recognizing Cemetech this year with two Editor’s Choice Awards for their “Learn Hacking and Coding with Graphing Calculators” project, which included everything from networked calculators to Internet-connected and music-making ones, in addition to resources developed for teaching math, science, and programming. Their past wins include an additional Editor's Choice Award and two Educator's Choice Awards.

The importance of CS education is hard to deny, but why graphing calculators?

Thomas eloquently makes the case: “I came from an area where a third of the population received free breakfast and lunch at school every day. These kids can’t afford computers, but graphing calculators are cheap enough that everyone will get to use one. The problem isn’t a lack of access to high-powered devices: kids will already have them, in the form of the family smartphone or even certain inexpensive toys. What they need is a programming environment, and graphing calculators can provide that.”