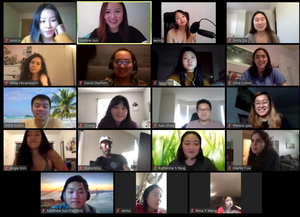 Click the link that follows for more news about Jessica Dai, the Brown CS Socially Responsible Computing program, or other recent accomplishments by our alums.

I caught the CS bug much like many others at Brown: through the games and brightly-colored pixels of the 15-16 sequence. I was enthralled by knowing there was a direct link between lines of code I had typed and the animations on my screen, but still, I had a vague idea that a job in CS wouldn’t quite be like re-implementing Tetris. I wanted to know more about the industry I was getting myself into, so I started reading – from work about the corrosive power of tech (like Algorithms of Oppression and Weapons of Math Destruction) to wildly enthusiastic startup-related books (like Peter Thiel’s Zero to One). Reading the former was horrifying; the latter, on the other hand, filled me with a thrilling sort of optimism, that any future might be built as long as I was willing to believe in it.

All of this meant that I felt stuck in a strange sort of limbo about where I fit into the world: I knew that technical skills gave me a unique (if small) amount of power and leverage to shape the world around me. At the same time, I also felt that some of the most consequential decisions were made impossibly far away from anything I could reach with code, that some of technology’s harms felt all but inevitable. I was left with the question of what could I, as an individual, do?

Brown CS is an especially supportive department for exploring issues of impact and social justice, whether it was taking classes (especially Professor Kamara’s Algos for the People), doing research, or being involved with the TA (and Socially Responsible Computing TA) programs – all of which I feel incredibly fortunate to have been a part of. Yet I still felt that something was missing: a big-picture view of technology as part of a broader system, a perspective that would contextualize and explain what I was reading about and experiencing. Over the first few years of college, my friend Jasmine and I, with whom I have been close since middle school, had recurring conversations about these topics, yet we’d often find ourselves going in circles.

Jasmine and I started Reboot in April 2020, around a month into lockdown. We reached out to a few authors who we knew had books recently published to see if they would be willing to do a virtual book event. At first, it was just a small group of friends and acquaintances we already knew, but eventually the community grew: new faces in the Zoom gallery that became familiar, a lively conversation in the Zoom chat alongside the main event. We realized that there must be others who shared what we both felt about the tech industry, the world, and our careers – this strange mix of optimism and trepidation – but who may not have had a formal space to work through those feelings or learn about new ideas. Reboot, we realized, could be that.

In January 2021, Reboot launched a fellowship program for undergrads around the world: twenty students from sixteen schools and four countries (and three undergrads from Brown).

Fellows spent time thinking about challenging, multidisciplinary issues in the industry as a whole, like technology’s relation to labor and business, while also reading a book and writing their own essays. Lucas Gelfond ’24, for example, wrote about the creator economy; drawing from his own work with the venture community, Ivan Zhao ’22 wrote about how the venture capital industry can change.

Both of these essays were sent to what is now a weekly(ish) newsletter; we publish original essays, book reviews, and interviews, with more than 900 subscribers. Our public events have reached over 500 people, and we have so many new projects in the works. For me, the most special thing about Reboot is our community: at this point, we’ve built out a community of more than thirty passionate students and recent grads, who are running book clubs, launching a Reboot podcast and magazine, and sharing advice on everything from writing tips to ethical career paths. Perhaps most importantly, we’re getting to know each other. While we’ve started out focused on reading, writing, and learning, our long-term vision is that we become a hub for building products and tools for the future. After all, our tagline is about reclaiming techno-optimism: “tech ethics” conversations often veer towards overwhelming negativity and pessimism, but it would be remiss to write off the potential of technology completely. To borrow the words of activist Yuri Kochiyama, tomorrow’s world is [o]urs to build – we might as well try to do a good job with it.

It’s not a coincidence that there’s a sizable overlap between Brown CS and Reboot community members; keep reading to hear from them directly! That said, we’d love to have (even) stronger ties to the Brown CS community. To keep up with what Reboot is working on, including our public events and original essays, sign up for our newsletter and follow us on Twitter!

In the words of Brown and Reboot community members:

“I'm interested in accessibility in and around technology, which is part of what brought me to responsible computing. Book talks have been really lovely spaces to think expansively....The biggest thing that makes Reboot unique is its emphasis on literature, social sciences, and theory more so than technical details. It's shockingly difficult to find this in a lot of university CS spaces. Since I'm also a translator and studied comparative literature, the emphasis that Reboot places on reading and writing is really refreshing.”

“The Tech x Labor group got really close and I love the community that we formed – we talked about organizing in the workforce, how we square our political/personal values with careers in tech, and other important/personal issues that I haven’t discussed in any classes.”

“Reboot...feels very on the pulse of new ways of thinking about tech’s role in society, and is way more generative and encouraging than gloomy technopessimism. My favorite part has definitely been finding a community of students who also want to engage with these issues and are super excited to start tackling them. I’m looking forward to the career guide series, where Reboot will interview a variety of tech professionals to try to demystify what people’s jobs entail. In the longer term, we’ve talked about a 'Reboot Builder’s Studio' where groups would actually build and implement possible solutions to social issues they identify, which I think will be incredible.”

“I initially got interested in Reboot since I’m interested in DEI work in tech and venture and saw a huge overlap in my interests; there’s a wide range of interests in the community. I think it’s different from schooling in that schools tend to have some hierarchy whereas Reboot feels more distributed...I’m excited about meeting up with Reboot members in person and building technology together. I think that building technology needs to have a critical lens from the start and I’m excited to be working with such a fantastic group of people.”

“My work to turn ideas into action has largely been through my involvement in the effort to unionize the tech workers at The New York Times, where I’ve worked as a software engineer since graduating in 2020. I ended up sharing my experience with the Tech x Labor fellows in a Zoom Q&A and did an interview for the Reboot newsletter.

Topics like the relationship between tech and labor – which are deeply relevant to folks who graduate with a CS degree but aren’t explicitly technical – aren’t really taught in a formal computer science education, so I’m stoked to see Reboot create a space for people to learn about and discuss them. I’m really looking forward to seeing how Reboot can be a radicalizing force for tech workers to-be, and continuing to meet new folks who are interested in grappling with how their work in technology interacts with imagining an alternative, more just future!”

If you have any other thoughts, questions, or feedback, feel free to email jessica.dai@alumni.brown.edu.

The views and opinions expressed above are those of an individual, and do not necessarily state or reflect those of Brown University or Brown University’s Department of Computer Science, nor does their publication here constitute an endorsement of them.