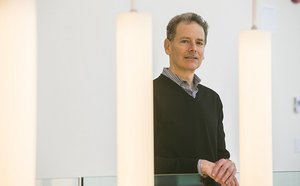 Click the links that follow for more news about Scott A. Smolka and other recent accomplishments by Brown CS alums.

It was during his time as a PhD student at Brown that Scott, along with the late Paris Kanellakis, a beloved and esteemed Brown CS faculty member, conducted the research that would turn into the award-winning paper. Their work examined the algorithmic and complexity-theoretic aspects of process equivalence in distributed computing, whereas previous research in the area had focused on the theory behind concurrent processes. Paris and Scott made their mark in the area by developing an efficient algorithm for deciding behavioral equivalence in polynomial time.

Currently, Scott works at Stony Brook University as a SUNY Distinguished Professor of Computer Science. His research interests center around cyber-physical systems and their real-world application to areas like cardiology and animal behavior. “Cyber-physical systems are typically concurrent and distributed systems. For example, if you think about the cardiac case, a human heart has trillions of cells, and you can think of that as a vast communication network enabled via electrical signals,” says Scott.

For Scott, Brown was not only the ideal place to develop his intellectual ideas but also to foster connections that would further those ideas. He recalls that he would not have found the topic for his paper with Paris without fellow PhD student Alessandro Giacalone introducing him to Robin Milner's manuscript A Calculus of Communicating Systems. In addition, he largely attributes his success in collaborating with Paris to Brown CS Professor Tom Doeppner for "showing [him] the ropes" in concurrency in operating systems.

Scott plans to donate the prize money to the Kanellakis Fellowship named after Paris, which is given annually to Brown CS PhD students.